I also had some excellent questions about this diagram: 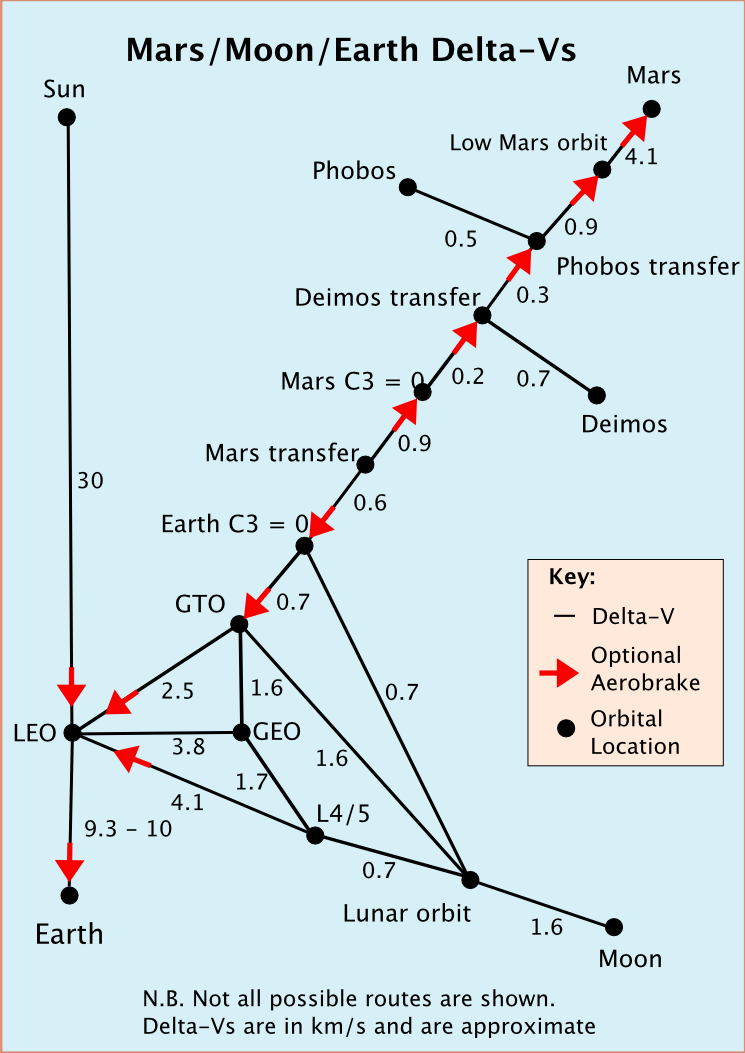 Specifically, the places where aerobraking can occur to assist (decrease the ∆v cost). The first thing we need to understand is what these places even are.

Well, they aren’t all places, per se, and that’s where it gets confusing. They are orbits. GEO, for example, is a “geostationary orbit” meaning it’s an orbit at an altitude such that you are moving around the Earth at the same rate the Earth spins, meaning you hold your position apparently stationary over one place on the planet. Sri Lanka is fine; that’s where Arthur C. Clarke put his space elevator in Fountains of Paradise. Since there’s no air there and there’s no air on any direct path to its links (GTO, L4/5, and LEO) there’s no opportunity for aerobraking.

You would guess from this diagram that GTO is further away than GEO. But that’s an artifact of the diagram which is not showing distances at all. GTO is a “geostationary transfer orbit” which means it’s an elliptical orbit with one end in a potentially geostationary position. The other end will be much closer to the Earth:

So we can see that if you were entering GTO from somewhere else (say, C3=0 which we’ll explain later), you could enter at the shallow end of the orbit and use the atmosphere to slow down enough to complete the burn for the orbit and wind up in GTO.

So if you wanted to burn into a GTO around Earth you need to slow down. Nothing’s stopping you from doing that so your vector passes through the atmosphere, using that friction to make the burn cheaper. However, going from GTO to C3=0 needs more velocity not less, so aerobraking is no help and that’s why the arrow only goes in one direction on the chart. It’s only useful to go through atmosphere when you’re slowing down.

Similarly, in “deep space” at your Mars transfer orbit you want to enter the C3=0 of Mars. While there’s no air there, you can plot your path such that you pass through some air on the way. Why would you want to though? If you have an elliptical transfer orbit you probably want to speed up to reach C3=0. I am guessing that they mean that you could be on a longer elliptical orbit for transfer such as:

In this case you want to slow down or possibly change direction and it seems like there’s an opportunity to use Mars to do it. I’m not sure I see exactly how that would help, but you certainly can pass through Mars atmosphere from a transfer orbit. I’m just not sure why.

Although the atmosphere at Mars is much much thinner, at high speeds and with a high cross section, it will still slow you down a bunch. The Odyssey mission, for example, used aerobraking to slow down. They burned from capture orbit (the orbit at which they just start to move slower than the escape velocity of Mars and so are now orbiting Mars instead of just the sun) to what they called an “aerobraking orbit” which was designed so that every time the craft passed through the short side of the orbit the vessel would slow down, slowly circularizing the orbit until it was suitable for the mapping work.

Over at the moon there’s no atmosphere at any of the adjacent nodes to lunar orbit so there’s no aerobraking. At the moon you have to do all the work. It’s also pretty cheap to land and take off from though!

Thanks to Pierre Savoie for the questions that spawned this

One thought on “questions about the ∆v diagram and aerobraking”