Okay let’s look at aerobraking. This is a way to get free ∆v for deceleration We’ll look at the principle and then talk about its utility. First recall our gravity example but I’ll add an atmosphere to the planet.

Now the atmosphere is a source of friction and friction reduces your velocity. As you bang into gas molecules, you slow down. We can treat this as a third vector in the system, opposing our direction of travel (our initial velocity vector). 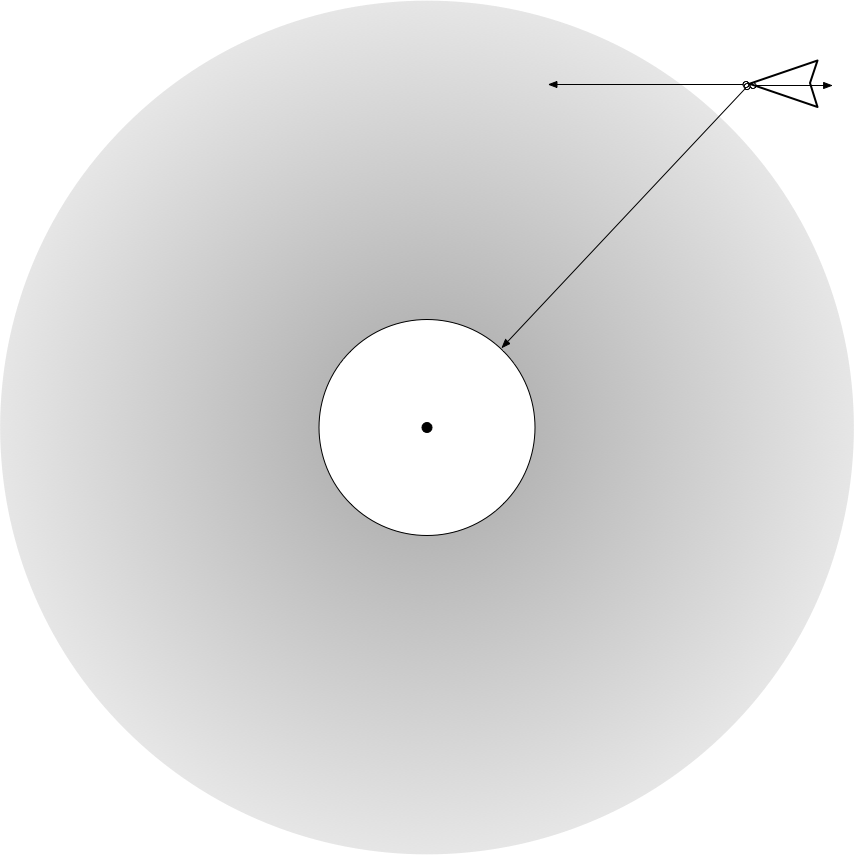 Back when we were first talking about vectors, we said that you add vectors by arranging them head to tail and finding the hypotenuse. This was a lie, of course, as all science education advances by correcting the lies told in earlier lectures. In fact you just connect the last head with the first tail, like so:

Oops. I crafted this example without figuring out ahead of time what it would do and it looks like this atmosphere is too dense for our maneuver! When science fiction stories talk about a “degrading orbit” this is what they mean if we’re being charitable: eventually atmosphere will drag you in if you’re too low.

However, that doesn’t have to be a crash! That could be a landing! In which case we saved the atmospheric vector from our ∆v resources. We totally meant to do that! Of course that’s not what that diagram represents since that enormous vector is our velocity and it does not look like a safe landing speed. Or angle. But that’s the principle and however much additional ∆v we have to spend to land safely, it’s reduced by the amount of drag provided by the atmosphere.

So let’s consider a hypothetical interception scenario — you are fleeing through space and the cops are after you. You have, let’s say, 7 units of ∆v and spend 2 planning a course to a safe planet. It’s months away and you’re committed and you now have only 5 units of ∆v. You’re saving some for slowing down at the far end — you need 3∆v to make orbit at your destination.

The cops spot you and match your course with 2 ∆v of their own. They have fast interceptors (high thrust for tactical corrections) but less reserves so let’s say they start with 5∆v. Now they have 3.

You spot the cops on your infrared telescope and track them for a couple of days, identifying their planned intercept point. You have a bunch of options. You have more total ∆v and if you know this you could burn more than they can afford to to change your course and correct back. If they spend any more than they have they won’t have the ∆v to slow down and stop somewhere to refuel. But if they aren’t tricked and don’t burn, then when you correct back they will still be on target.

You could also fake a course to a totally different location, spending maybe 3 more ∆v leaving you with 2. If the police correct for that they will be totally committed (they won’t be able to slow down so they are clearly going to try to kill you in a flyby and then count on other cops to save them from leaving the solar system) but you have some spare.

Maybe it’s not enough to make orbit around your original destination — you’ll be going too fast. But if you’re equipped with heat shields for aerobraking, you can steal 1∆v from the atmosphere and get the 3 you need to make orbit despite going way too fast!

Or maybe you won’t slow down! Maybe you’ll steal 1 ∆v from slingshotting your destination on order to head somewhere completely else!

Finding spare ∆v in the system geography is how you exceed your space craft’s specifications, and it’s a skill your character might have. Yes, we’re almost talking games now.

Since this is science fiction, what other sources of ∆v might be lying around a high tech industrialized star system?