The further your game world drifts from the real, modern world the more you have to let players make shit up. 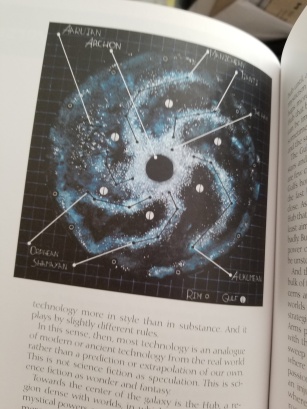 Universes are crazy big. Douglas Adams tried to tell us how big and didn’t come remotely close. Universes, however, that obey our physical laws at least have a set of truths that you can draw on. A set of premises. How gravity works, how fast light goes, what’s in the periodic table of elements, and stuff like that. And so, as a player, there is a significant fraction of the universe that you can manipulate safely (game-safe I mean). If I see a plausible orbital maneuver in the way the ref has laid out a space, well, I can probably do it. There are touchstones and they are myriad.

I think sometimes we forget just how much shared knowledge we have.

I used to play a lot of games set in my home town of Vancouver. One of the chief advantages to this was the touchstones — you could hide in that place you know, the culvert under the highway up near Kelly’s place — and you weren’t making that up as a player: that place exists. Most of us knew it. Many of us secretly drank there on Friday nights. So most of the play space is known and does not require mediation. It’s just real.

Science, if it works in your game, is like that contextual touchstone but writ large. We all know (and can expect and therefore manipulate) how gravity works, what air pressure does, how things behave at very low or very high temperatures. I don’t need the ref to fabricate any of it and imagine the burden if I did!

Now as you drift from real places in a real universe the amount of information needed to manipulate the environment increases and very very rapidly. There are millions of pages of material written about how this world works. Maybe billions. Your fantasy world, however, has only the tiniest fraction of that content: a practically non-existent amount of material. Frankly no one, even the originator of the fantasy world, knows much of anything about it compared to the content available from the real world.

But you should know. Your character lives in this world and is aware of a similar volume of data that you have by living in the real world. Your character knows about the equivalent of that culvert under the highway and thousands of other truths that know one has every thought to write down or map out. It would be an impossible task.

We mediate this by putting a ref in the hot seat. The fewer the touchstones, however, the more of a burden this becomes on the ref. And the less reasonable it is for them to mediate it — they don’t know either, we’ve just given them the authority to invent it.

I’ll suggest then, that the more your world deviates from reality the more benefit you’ll get from letting players make up their own details. As ref just nod and follow along. If you can’t pre-fabricate all of the details of the world then this will give you two significant advantages: you’ll get a world that’s the product of four or five peoples’ creativity rather than one (it’s nowhere near what went into the real world but it’s five times better than investing the whole problem in one person) and your players will be able to smoothly “recall” facts and even manipulate them without the awkward “was there some place we used to hide as children maybe” — useless roll — “yup there was a culvert under the highway” exchange.

Once you get used to that you can let them manipulate. For example, games rarely if ever examine exactly how magic works (mostly because it always results in contradictions in detail and so it’s best glossed over — magic basically can’t work so don’t look too close). If I’m playing an ancient wizard who’s researched it forever, though, then I expect to have some detailed hypotheses about the underpinnings of magic and a good deal of experimental evidence for it. And I will want to bring that to bear. 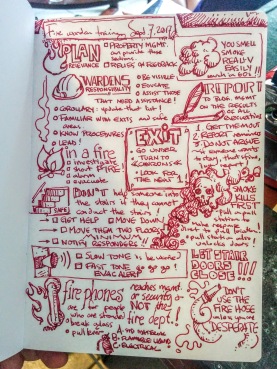 When I do, I want to imply vast knowledge I don’t actually have. Consequently it’s probably best if I just make it up. “I’ve studied fire magic all my life and I am certain that it is not simply brought into being as that would violate the third law of thaumaturgodynamics. Magical fire must therefore come from somewhere. I postulate that it comes from the plane of Elemental Fire and that therefore it must create a path. I think we should try to track this Efreet by trying to identify this path.” Now I’m not narrating my success, but I am saying a lot of facts about the world that no one ever ever wrote down in advance. Those facts should not be subject to mediation. The ref should greedily note them and start crafting complicated implications. And yet there is resistance to this kind of player participation in world building.

The map of your fantasy world is basically completely empty other than the gross geography. I highly recommend inviting anyone who’s found a blank spot to fill it the fuck out.