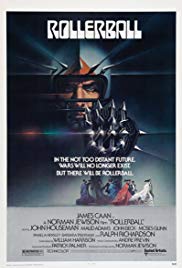 The first game I ever designed was a Rollerball simulator. Based on a single and heavily edited viewing on television I decoded the rules to the sport and built an oval track game complete with the starting gun, motorcycles, the magnetic goal, and punching.

I was 11 or 12. The game worked. So right out of the gate I knew I could make games. It would be a long time before I decided I could (and that would come mostly by being handed a way — POD) make games for other people to play.

Did my game manage to capture the theme of corporate management and violence as entertainment? No.

But it was a functional simulation of a fictional sport and it was fun to play. It is gone without a trace. 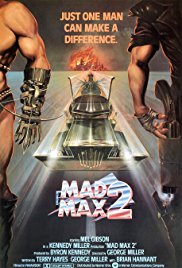 This film fed into our love of all things apocalyptic (since we knew we were going to die in atomic fire). It added wild cars, which we hadn’t considered, and consequently drove the purchase and near-constant playing of Steve Jackson’s Car Wars.

Weirdly (though we were older now) we did get the underlying themes and did start playing games about rebuilding community and about the difference between survival and thriving. Of course the games were still combat-heavy and centered on our gear, whether vehicles or weapons, but we were also exploring how we would cope should we survive the coming nuclear disaster. In fact I spent a day with my social studies teacher driving around Vancouver taking pictures of buildings. When I got them developed (you had to do that in the Old Days) I marked them up with a technical pen, adding the necessary destruction: our games were about surviving the thermonuclear holocaust in our home town. And my idea of post-apocalypse would always center about my home town.

This wasn’t fantasy for us. This was planning. We really thought this could happen. And yet it still didn’t influence me enough to make me learn how to drive: in an emergency I could perhaps be the gyrocopter pilot but not Mad Max.

This film is primarily about being cool above all else. Above intelligence, above compassion, above common sense. Everyone in this film is obsessed with how cool they are and, most importantly, that they are cooler than everyone else. The big surrender at the end is a surrender of cool, the agony of compassion betrayed, an actual uncool warm masculine feeling undermined and soaked in blood.

Of course this was part of what would be Hollowpoint — a game in which you can only be violent. There is no mechanism for anything else and so any compassion you bring to the game is all you. It is constantly undermined by the mechanism. Eventually your character is taken out, and while that is prosaically death, most players have their characters leave in disgust at who they’ve become–and then roll up a character who is worse and start play by giving the rest of the group shit for screwing up and losing a partner. That is, the scene starts by establishing your cool dominance.

Finally a space ship that might actually work. A space station with spin gravity. Weightlessness on the transit from Earth to the Moon. And the quiet coldness of hard science fiction.

I was a big reader of classic science fiction as a kid and when I read science fiction now it is more often older classics than newer material. Sure, I dig The Expanse of course, but it’s an outlier. Now 2001 didn’t really influence in a sense — it more epitomizes what I wanted out of science fiction gaming and consequently what I wanted from an sf game. It didn’t make me play Traveller, but it acted as visual and thematic touchstones for it. We spent a lot of time seeking ancient incomprehensible artifacts. We constantly made ourselves feel that the immediate drama of being human was in fact tiny and pointless compared to what the universe was really about. And it wasn’t about us.

Of course this aesthetic would carry on to Diaspora.

The Duellists is a Napoleonic period piece about obsession. One character (Harvey Keitel) is obsessed with his honour and duelling the other character (Keith Carradine) to the death. Feraud (Harvey) is single-minded and uncomplicated but not above fear. d’Hubert (Keith) has a full rich story for his life and is continuously nagged, tormented by Harvey’s pursuit and their periodic inconclusive duels.

The two characters are opposing views of (in an extreme way) what it means to be male. The senseless pursuit of honour as an excuse for violence destroys every other aspect of Feraud’s life and he doesn’t care. He has defined himself by this pursuit of violence. And on the other side is a man who tries to live a full, thoughtful, and compassionate life but is constantly forced to address the obsession of another man.

I’m pleased that I can see this stress in most of my games. That there is always an acknowledgement of the compassion that humans (and men, from my own perspective) must fight to preserve in the face of a world that sometimes only offers us violence and stupidity as an option. If the game is going to have violence in it, it’s going to be an interruption and not the focus. My hope is that we will pick up the game and play d’Hubert and not Feraud.

Except in Hollowpoint. In Hollowpoint you more likely play Feraud through to his logical end. See the film. It’s not what you think.

Also, check out the design on that poster. You can’t really think I wasn’t influenced by that.